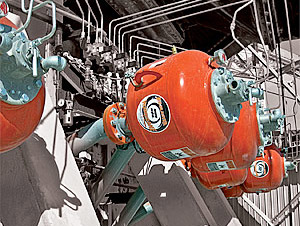 This job story addresses the importance of proper Air Cannon installation and what adjustments or repairs can be made when they are initially installed incorrectly. A paper mill in New England used air cannons to prompt the flow of wood-chips into the paper making process. The air cannons were especially important during the winter when the moisture-laden wood-chips would freeze. Air cannons, also known as air blasters, are flow-aid devices that use a pressure-rated reservoir of stored compressed air or nitrogen at 10 to 125 PSI to quietly supply a powerful blast of air into storage or process vessels, chutes, or ducts. They are equipped with a fast-acting, high-flow discharge valve that, when strategically located and properly oriented and controlled (automatically or manually), creates an eruptive blast that unclogs, dislodges, and prevents the material build-up that chokes plant productivity and efficiency.

Mill personnel purchased and installed new air cannons in 2007 to replace 30-year-old units that used too much energy. Replacing the old units with new MARTIN® HURRICANE® Valve BIG BLASTER® air cannons promised a 50% reduction in air consumption. The new air cannons would also reduce maintenance costs that had begun to add up due to the age of the old air-blaster system. The paper mill hoped the new, more efficient MARTIN HURRICANE air cannons would reduce or eliminate the high repair incidence of the 30-year old air blaster system.

The upgrade did save money and worked well for a few years, but then workers discovered the new air cannons leaked compressed air. An inspection by an AIRMATIC Application Specialist revealed that the cannons were incorrectly mounted so that they shot at an upward angle into the bins. This incorrect positioning permitted wood chips, dust, and water to gradually infiltrate the air cannon valves during periods of inactivity, causing mechanical damage.

To remedy this problem, AIRMATIC Application Specialists recommended that all air cannons be removed from the vessel, disassembled, and cleaned. After removing wood chips and other contaminants from the blasters’ air reservoirs and exhaust valves, technicians inspected the air cannons for damage. AIRMATIC technicians repaired the piston assembly and other damaged parts and reinstalled the valves according to manufacturer specifications. After monitoring the repair for a month, results showed a significant increase in efficiency and plant personnel were confident that the problem had been solved.

As this case study shows, AIRMATIC cleaned and repaired the clogged air cannons and reinstalled them according to manufacturer specifications in order to prevent the same problems from occurring in the future. In having this work done, paper mill management is confident they will maintain lower operating and maintenance costs in the coming years and the system will be even more efficient and productive.

If you have any concerns about any aspect of your air cannons, call us at AIRMATIC. We'll Handle it. 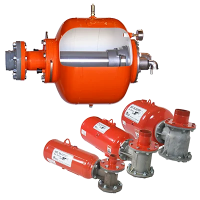 Select from our catalog of air cannons, bin aerators, and sonic horns that play an important role in maintaining the flow of bulk materials from a storage vessel.