This facility in eastern Pennsylvania manufactures lead acid batteries. The process is 100% closed loop, meaning all dust, fumes, waste materials, and chemicals generated by the process are contained within the facility and recycled. For example, lead oxide powder drawn from the smelting operation is collected by baghouse filters and ultimately reintroduced into furnaces to be melted with scrap lead and lead ore and ultimately made into a lead ingots.

The lead oxide powder from the smelting operation was frequently plugging the 12” diameter feed pipes leading to the furnaces. These pipes must remain clear of blockages in order to maintain a consistent feed to the furnaces. To facilitate flow at the 24/7, 365-days-per-year operation, the customer had installed vibrators as mechanical flow aids. Yet, blockages were still occurring, a fact that suggested that the vibrators were installed at the wrong locations. Another problem was weld cracking and damage to the pipes, which can lead to oxide dust leaking out of the system.

The customer also discovered they could make other improvements to the dust flow by increasing the angle of the pipe and eliminating an elbow.

Pleased with the results, the customer purchased 14 of the new mounting units and installed them on all of their 12” dust pipes. Thanks to this improvement, the customer has virtually eliminated both the recurring blockages and the damage that the constant vibration had been causing to the pipes. 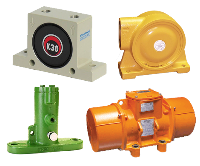