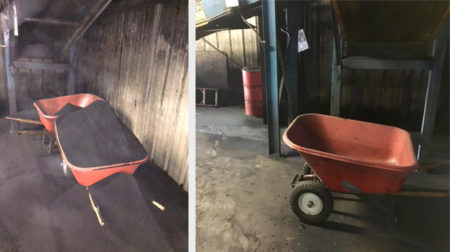 The Fundamentals of a Clean, Safe, and Efficient Conveyor

This job story focuses on controlling dust and air movement at conveyor load zones when processing bulk solids to save time and money. Inefficient design results in operational, safety, and morale problems at transfer points because of escaping fugitive materials. The facility in this case study is a leading paper mill located in the Middle Atlantic States. The plant is primarily dedicated to paper-making, but it also processes coal used to power the plant.

The coal transfer tower at the plant experienced substantial volumes of turbulent air when the coal moved from the crusher to conveyor. This resulted in pressurized airborne dust escaping the transfer point and covering the surrounding area. Workers filled wheelbarrows several times a day with the powdery dust that covered the floor, railings, and all nearby surfaces. Sweeping and daily clean up were consuming an increasing amount of worker time and effort. In addition, escaping material caused rapid skirt wear, belt mis-tracking, and other conveyor maintenance problems. Finally, the fugitive material created an unsafe environment for workers.

AIRMATIC Application Specialists concluded MARTIN® conveyor products would eliminate the problems. First, AIRMATIC installed a belt support system to prevent the belt from sagging. Sagging belts allow fugitive material to escape along the sides of the belt line. Next, belt tracking devices were installed on both the carrying and return sides of the belt to reduce alignment problems. To better contain the material, a double-lip, self-adjusting skirting was installed to replace the existing skirting and keep the edge sealed. Abrasion-resistant wear-liners were installed inside the transfer point skirt-board to prolong the life of the seal. Finally, a high volume “passive” dust settling zone with multiple dust-trapping curtains was installed on top of the existing chute walls to reduce air velocity. This solution enabled dust from the conveyed coal to settle, allowing cleaner air to exit the chute.

Weeks after the installation, the plant manager reported that the amount of fugitive material cleaned up had gone from several wheel barrows per day to less than one per month, and that his operators can now use a broom to periodically sweep up rather than a shovel.

AIRMATIC eliminated the paper mill’s nagging conveyor problems with the installation of MARTIN® transfer point products. The mill can now process coal and prevent airborne dust from escaping the conveyor loading zone. Maintenance and downtime costs have gone down and worker safety and morale have improved. More than a year after installation, the transfer point is one of the cleanest areas in the plant.

If there’s some aspect of your operation you’d like to clean up, call us at AIRMATIC. We’ll Handle It.