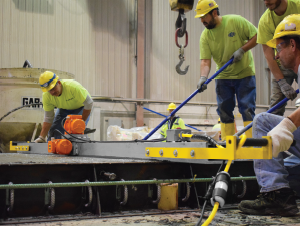 This job story illustrates how processes can be improved and employees made happier by innovative adjustments to upgrade existing equipment. A New Jersey-based precast concrete company was being dragged down by its 200-pound vibrating screeds. Employees regularly had to drag the screeds down a 300-foot-long form bed. The work was physically taxing — and exactly the sort that leads to employee dissatisfaction, or worse: worker injury. These were all problems that were costing the employer time, money, and result in Workers Compensation issues.

Due to the physically challenging work of dragging a 200-pound piece of equipment over 300 feet multiple times to get a good finish, screed operators were getting hurt. In some instances, operators quit their jobs because of the hard labor. The entire operation was held hostage the labor-intensive job that no one wanted to perform. Additionally, the amount of vibration fatigue the employees endured in their hands, arms, and shoulders while screeding made them even more uncomfortable.

Not only were we able to improve the safety and productivity of this Customer’s workforce, but we were also able to engineer a solution that would help others in similar situations. Our success led to the development of the MOTOSCREED, a revolutionary design in vibratory screeds. After experiencing success with modifying one of their existing screeds, this Precaster became the first Customer to purchase a complete MOTOSCREED, now part of the WORKMASTER brand offering.

With the screed modification, operators were able to smoothly guide the screed down the form with little to no effort. The design improved the screed’s performance, providing for a better finish on the concrete produced. In short order, employee morale improved and turnover declined. Operating the screed became a job people didn’t mind performing. In fact, although the company has three other screeds of the same size in operation, they largely sit idle as operators vastly prefer the modified screed. 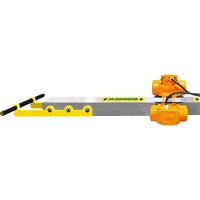 A Concrete Vibrating Screed that uses uniquely mounted dual 115 VAC vibratory motors on a 6"W x 4"H x 6' to 18'L aluminum beam that self-propels the Screed down the Form as it spreads, consolidates, levels and surface finishes conventional, high-flow and self-compacting concrete.